The Solution to Soft Collision Damage: the GyroSense

If you're reading this article while standing, raise your hand!

I'm going to venture a guess that most, if not all, are reading this while sitting. If so, you are not alone. According to Daniel Engber, jobs requiring moderate activity has dropped 58% since 1960. The year 2000 saw a first: US jobs requiring light-intensity activity became higher than 50%.

With the recent re-introduction of the concept of standing at work, the use of adjustable height desks grew. Whether by using electric motors, pneumatics, or hand cranks, people started to change their sitting habits by alternating between sitting and standing while working.

Regardless of which method used to adjust a desk, all deal with obstructions. Of those three methods, using a motor is the most problematic. 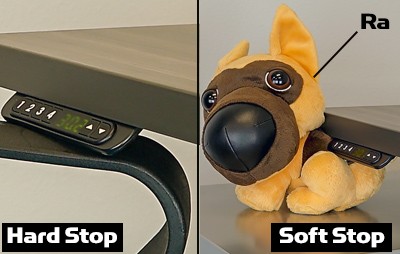 There are two kinds of obstructions: hard and soft. A hard obstruction, or hard stop, happens when a moving table hits something hard like a cabinet or the arm of a chair.

If you hit something while adjusting the height of the desk by hand, you stop what you're doing and remove the obstruction.

If you're pressing a button on an electric desk to change the height, you'll quickly discover that regardless of how fast you release the button, the motor doesn't stop on a dime. There's a delay of a few moments before the motor reacts to the increased amperage by using its overload protection. By the time the table stops moving, the damage already occurred.

When running into a hard stop, the motor usually reacts quickly and stops its progress. With soft stops, there's a chance it won't be detected, and nothing prevents the table from completing its cycle.

It's the soft stop that potentially causes more damage.

For the first time, there is an alternative to relying on the overload protection of the motor. 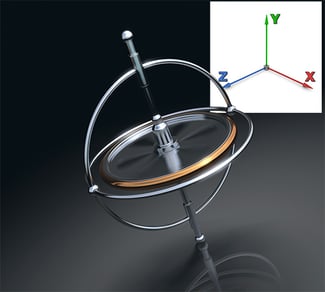 Gyroscope and its 3 Axes

RightAngle Products is one of the first manufacturers in the industry to feature the GyroSense.

Put simply, the gyro sensor in our tables helps the control box to understand which way the table is oriented. The gyro detects changes in orientation and rotational motion in the X, Y, and Z axes.

There are plenty of examples where modern electronics include a gyro sensor. They're found in some smartphones, shake detection systems in cameras, and vehicle anti-skid systems.

Using a gyroscope, RightAngle introduces the solution for the problem of soft collisions.

However, before we go into detail, let's take a seat and see how we got here.

Evolution of the Chair 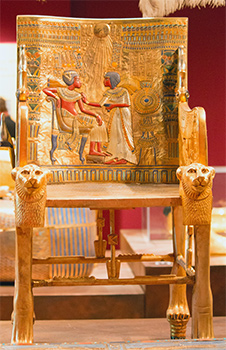 Sitting while working is a relatively new concept. Over the course of the last 120 years, Americans have slowly evolved into a sedentary work environment. We, I included, spend dozens of hours staring at monitors every week.

This wasn't always the case.

Thousands of years ago when we lived in primitive conditions, we sat where we found something handy to sit on such as a tree stump or the ground.

Around 3000 BC, Egyptian royalty and élite sat on elevated thrones to look down on their subjects. However, to help ease the perils of heavy daily labor, Egyptians also developed a three-legged stool with a concave seat tilted forward to help artisans make their tasks more manageable. 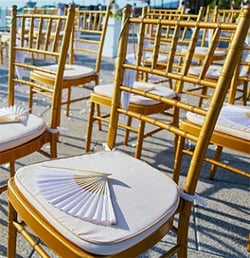 Then around 700 BC, ancient Romans invented the Roman Daybed, which was only available for the wealthy. 200 years later, the Greeks developed the earliest known use of bench style seating in their amphitheaters, which the Romans copied when they built their Coliseum in 70 AD. Churches borrowed bench seating for their parishes as well.

The concept of the modern chair started in 1807 with the Chiavari chair, developed by an Italian named Giuseppe Cayetano Descalzi. The Chiavari used lighter, less expensive materials making it available for regular people.

Soon after, the rise of mass production during the Industrial Revolution introduced chairs to almost anybody who wanted one. 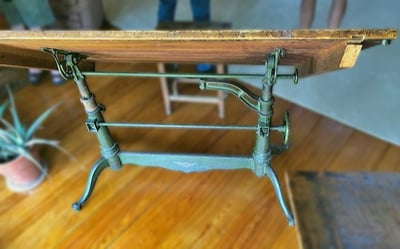 The concept of standing at a desk while working goes back several hundred years. In fact, many well-known historical figures preferred to stand. Here are only a few famous people who stood while working:

From Standing to Sitting, Back to Standing 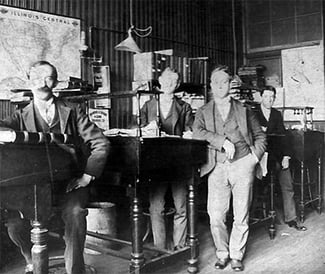 In the 1800s, most people working in offices stood during the day. Most office jobs in the US didn't offer chairs. People spent the day standing at their desks with a tall stool nearby. In fact, an 1858 self-help book suggested:

...that professionals practice penmanship on their feet — since “nearly half” of all business writing was done at standing desks. Inventors of the era filed patents for bureaus that could be adjusted with cranks.

As America became increasingly industrialized, the number of office jobs blossomed. Because of the mass production of chairs, based on the Chiavari design, office chairs became the new normal. As the use of chairs grew, people viewed those using standing desks as peculiar.

Once the healthy benefits of sit to stand desks became known, people began standing more during their time behind a desk. Because of this transition, sit to stand desk manufacturers started focusing on methods to adjust the height of the desk. The three primary ways to adjust the height of a desk, as explained above, are cranks, pneumatics, and motors.

Patents for crank desks appeared in the 1850s. Afterward came the pneumatics then the motors.

Here, at the end of this journey, is where we find ourselves today.

The concept of the soft collision solution began at RightAngle from the beginning.

We’ve been working towards a soft collision system since we started manufacturing height adjustable desks,” said Bill Knighton, president of RightAngle Products. “The GyroSense dramatically reduces the possibility of damage to your desk and other equipment. Our video highlights the absolute difference between our table with GyroSense technology versus a competitor’s product that uses anti-collision based on amperage. 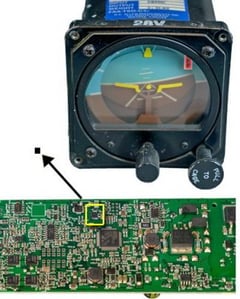 Size of GyroSense compared to an aviation gyroscope

What I found that shocked me was how small our gyroscope is. When I removed the cover of the control box, which is something the end-user should never do, I wasn't able to find the gyroscope.

Following a detailed set of directions, I finally located the gyroscope. Hint, it's incredibly small!

The black square in the image to the right is the size of our gyroscope. Compare that square to an aviation gyroscope.

What's impressive though, is how large our gyroscope is when compared to those found in many smartphones.

When requests for proposals arrive at office furniture manufacturers, something is missing.

“When organizations request information for proposals, they rarely include any safety requirements,” said Knighton. “Low-quality furniture manufacturers cut corners to keep their prices low. As a result, collision safety is an unknown factor in our market. The GyroSense helps eliminate those concerns.”

Whether or not an organization explicitly requests measures for safety, it's now standard with our height adjustable desks.

I can write all day about how effective our GyroSense detects soft stops, but let me take a break.

We tested our new GyroSense on two tables, ours and a competitor's.

Take two minutes to check out this video to see what happened. The results speak for themselves.

Electrical overloads occur when amperage increases across a circuit or an electrical wire. If there is no overload protection available, overheating or damage occurs.

Overload relays protect the motor by monitoring current traveling to the motor. If the incoming current exceeds the designed amperage for a motor, the overload protection shuts it down before any damage occurs.

With this upgrade in technology, a One Touch option is also available on our 4-button programmable switch. The One Touch is a touch-and-go feature that automatically adjusts the table to its pre-programmed heights. 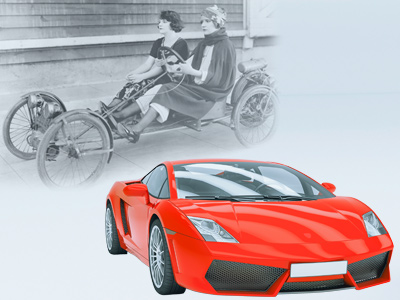 Throughout history, we've seen technological advancements that improve our lives. Each improvement, however, creates its own set of obstacles.

For example, look no further than the automobile. When Karl Benz invented the first true automobile in 1885, people started moving forward much faster than ever before. As important as moving forward was, stopping was pretty crucial, too.

Tires began as steel rims, so wooden blocks applied by a single lever stopped a car that's traveling 10-20 mph. However, when the Michelin brothers developed rubber wheels, the wooden blocks no longer worked because they grounded the rubber down.

Overcoming this obstacle was Gottlieb Daimler who developed the concept of a mechanical drum brake in 1899. His Drum brakes evolved into our modern braking system.

Like automobiles, over time, desks evolved from a fixed position standing desks to sitting desks, to adjustable height desks. The method of adjusting sit to stand desks also advanced from cranks to motors.

Finding a solution to soft collision damage has long been a goal of most office furniture manufacturers. The GyroSense from RightAngle represents that solution.

Is the Best Standing Desk Worth the Price?

What is the Truth: Do Standing Desks Help?